What is the Atlanto-Occipital Joint?

The atlanto-occipital joint (O-C1) is formed by the occipital condyles and the upper articular facets of C1. These paired joints each look like a saddle and both are stabilized by multiple ligaments and the articular capsules of O-C1.

The O-C1 joint is responsible for the most flexion/extension of any vertebral segment with 25 degrees of motion. There is a small amount of rotation (5 degrees) that also occurs here.

The basion is the front edge of the foramen magnum and the opisthion is the rear edge, important bony contact points for the stabilizing ligaments of this joint.

The stability of the atlanto-occipital joint stems from multiple structures. The aforementioned joint capsules of the O-C1 joint create substantial stability. The other ligaments are noted here from front to back.

How the Atlanto-Occipital Helps with Neck Stabilization

The anterior atlanto-occipital membrane (a continuation of the anterior longitudinal ligament) attaches from the anterior arch of the atlas to the anterior aspect of the basion (the front of the foramen magnum). This ligament works to prevent excessive neck extension.

The twin alar ligaments attach from the lateral aspect of the odontoid process (dens of C2) to the medial occipital condyles on either side. These ligaments limit flexion and rotation at the atlanto-occipital joint.

The apical ligament attaches from the tip of the odontoid process  (C2) to the basion. It is sandwiched between the alar ligaments and the cruciate ligament complex. This ligament is not significant and does not contribute to the stability of O-C1.

The tectorial membrane is an extension of the posterior longitudinal ligament and lies posterior to the cruciate ligament complex. This ligament attaches from the dens to the anterior foramen magnum. Due to its position, this ligament limits both excessive flexion and extension.

The ligamentum nuchae is a continuation of the supraspinous ligament and spans from the posterior occiput to the spinous process of C1. This ligament serves to limit excessive neck flexion. (Click to Enlarge) Alar ligaments attach from the odontoid to the condyles of the skull. Large arrow odontoid, small arrows alar ligaments. 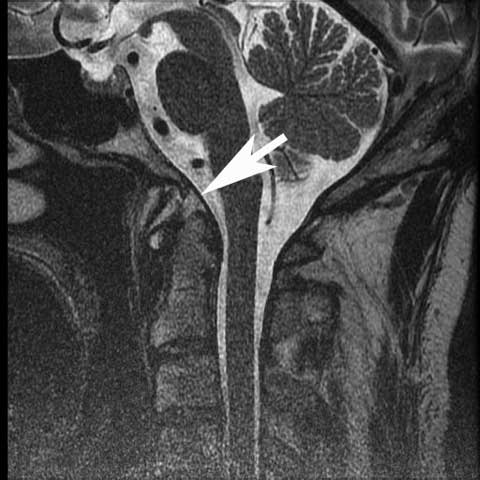 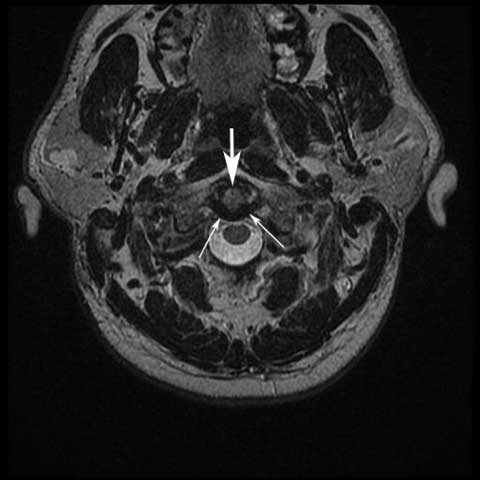 Donald Corenman, MD, DC is a highly-regarded spine surgeon, considered an expert in the area of neck and back pain. Trained as both a Medical Doctor and Doctor of Chiropractic, Dr. Corenman earned academic appointments as Clinical Assistant Professor and Assistant Professor of Orthopaedic Surgery at the University of Colorado Health Sciences Center, and his research on spine surgery and rehabilitation has resulted in the publication of multiple peer-reviewed articles and two books.
Page load link
Go to Top